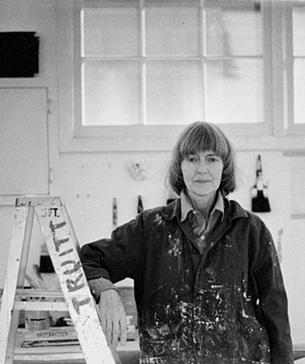 Anne Truitt was born Anne Dean in 1921 in Baltimore, Maryland. She spent her childhood in Easton on the Eastern Shore of Maryland, and in 1943 she graduated cum laude with a BA degree in psychology from Bryn Mawr College. Truitt worked as a Red Cross nurse’s aide at Massachusetts General Hospital until the end of World War II, serving in the wards at night after working as a research assistant in the hospital’s psychiatric laboratory during the day. She wrote poems and short stories during this time; these exercises, as well as other writings and correspondence, form part of the archive held today at Bryn Mawr College.

Truitt married James McConnell Truitt in 1947 and moved from Boston to Washington, DC, where he worked in the State Department. She continued to write, and in the 1950s she translated from French to English a book written by professor Germaine Brée of Bryn Mawr College: Du temps perdu au temps retrouvé, published by Rutgers University Press in 1956 as Marcel Proust and Deliverance from Time. In 1948 James Truitt left the State Department and began a career in journalism; subsequently the Truitts moved around the United States and lived in Japan from 1964–1967 when James was Tokyo bureau chief for Newsweek.

In 1949 Truitt studied sculpture for one academic year at the Institute of Contemporary Art in Washington, DC, followed by three months at the Dallas Museum of Fine Art. Following this formal training, she experimented with various media and techniques, including clay, cast cement and plaster, and steel welding. In 1961 Truitt began to work in the style for which she later became known: painting multiple delicate layers of color characterized by subtle variations onto wooden constructions fabricated in accordance with scale drawings; the structural elements of these sculptures constitute armatures supporting color. Writing in April 1965, Truitt stated: “What is important to me is not geometrical shape per se, or color per se, but to make a relationship between shape and color which feels to me like my experience. To make what feels to me like reality.” Abstract yet rich with feeling, the works are grounded in memories and sensations accumulated over a lifetime. This referentiality is in stark contrast to the literalness of Minimalism, a movement with which her work is sometimes associated. For Truitt, abstraction provided a syntax for her impressions — of people, places, ideas, and events. She wielded color and form as metaphors for thought, developing a visual grammar that remains unique in the history of art.

Truitt was a major figure in American art for more than forty years. She had her first solo exhibition in 1963 at André Emmerich Gallery, where her work would be principally represented for the next three decades. She was subsequently included in several landmark group exhibitions, such as “Black, White and Grey” at the Wadsworth Atheneum (1964) and “Primary Structures” at the Jewish Museum (1966); and has been the subject of solo museum exhibitions at venues including the Whitney Museum of American Art (1973), the Corcoran Gallery of Art (1975), and at the Baltimore Museum of Art (1992). The Hirshhorn Museum and Sculpture Garden mounted the first posthumous retrospective of her work in 2009. Today her estate is represented exclusively by Matthew Marks Gallery, and her work is in the collections of many leading museums in the United States, among them the National Gallery of Art, Washington, DC, the Art Institute of Chicago, the Los Angeles County Museum of Art, the San Francisco Museum of Modern Art, and the Metropolitan Museum of Art, the Museum of Modern Art, and the Whitney Museum of American Art, New York. Her work is also represented in international collections, notably the Panza Collection in Italy. In 2017, the Dia Art Foundation announced a major acquisition of Truitt sculpture and painting. These and other works by the artist are now on view at Dia Beacon, New York, as part of a long-term installation. A major survey exhibition at the Museo Reina Sofía in Madrid is scheduled for 2024.

In addition to her work as an artist, Truitt wrote four books that distilled years of journal entries into a vivid account of her life as an artist: Daybook (Pantheon, 1982), Turn (Viking, 1986), Prospect (Scribner, 1996), and Yield (Yale University Press, 2022). In 1984 she was acting director of Yaddo, the artists’ retreat in Saratoga Springs, New York. Her contributions to both scholarship and art have been recognized with many honors, including a Guggenheim Fellowship and five honorary doctorates. She was awarded the Cather Medal in 2003.